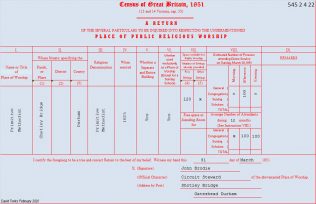 The stone was laid by Rev W Lister of Hexham on Monday November 24th 1851. At the ceremony, the following tea for 250 people in the Music Hall and the evening public meeting, sermons were preached by Rev, W Salt (Wesleyan), Rev W Lefevre (Baptist), G Charlton (Newcastle), J Charlton, B Stokoe (Blayden) and G Blackey and T Carrick of Shotley Bridge.  Mrs Wrighton and female friends raised funds through a sewing basket.

The chapel was replaced by a new one on Front Street in 1894. The laying of the memorial stones on a site purchased some years previously is recorded in the Primitive Methodist magazine of October 1894. They waited until they had paid off the debt on the land before starting building.  new chapel was expected to cost £2,000 of which they had already raised over half. This chapel building still exists, although the society merged in 2014 with Blackhill Methodist Church on Durham Road. It is now called the Blackhill & Shotley Bridge Uniting Methodist Church

You can read more about the growth of Methodism in Shotley Bridge here.