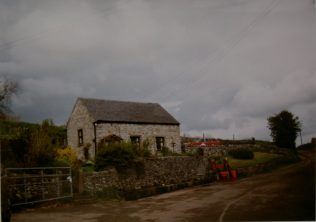 The chapel is a grade II listed building.  It is described at the time of its listing as follows:

The Primitive Methodist magazine for August 1857 includes an account by James Shaw of the re-opening of Ible Primitive Methodist chapel after refurbishment with a new floor, door and windows, a platform pulpit and complete re-painting.  The exterior walls were rough stuccoed.  The entire cost was £30 (which was met by the time of opening).  Re-opening sermons were preached by Samuel Rains of Manchester, whose family was centrally engaged in the improvements.

James Shaw describes Ible as “a small hamlet, remarkable for its very romantic and wild scenery”. It was missioned in 1822 and the first chapel was built in 1823, the only place of worship in the village. The society was led by Mr John Rains, who was still the leader in 1857.  Ten of his twelve children were “useful members of our beloved Connexion.”

The chapel was again refurbished in 1879.  It accommodated 50 people.  It is now a house.