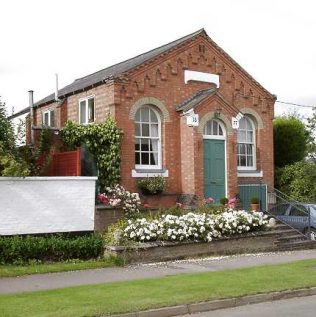 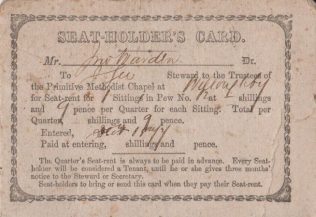 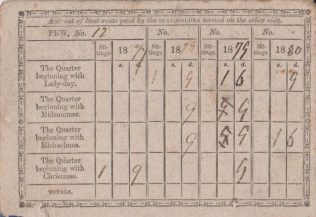 As the Circuit Archivist for the Leicester Trinity Circuit I have just been given a small pile of records for Willoughby Waterleys to take to the local Record Office. It includes the Pew Rent Ledger for the period 1878 – 1914.

There were 16 pews altogether but not all were let. The village only has a handfull of houses and as the church is now a private house it is difficult to imagine how they managed to get 16 pews into the building.

The pictures are of a Seat Holders Card which was issued to everyone who paid their Pew Rent. The card was held by the renter and was similar to a ticket entitling him or her to sit each week in the same seat.

This particular card is for John Warden who rented Pew No. 12 at a cost of 9d per quarter from October 1877 which would have coincided with the opening of the church as a Primitive Methodist Church. The instructions about payment seem to have been ignored by John as he was obviously late paying his 1880 Midsummer payment when he paid 1/6d at Michelmas.

John was born in 1855 in the village so would have been 22 when the Chuch opened. He was an agricultural labourer living with his grandparents in the village. They were framework knitters meaning that their standard of living was about as low as it could get at the time so raising the 9d per quarter may have been more difficult then it would seem.

John married Mary Jane Saunt in 1881 and they went to live in Whetstone a few miles from Willoughby. John got a job there as a Farm Bailiff so was promoted and would have a good rise in his living standards.