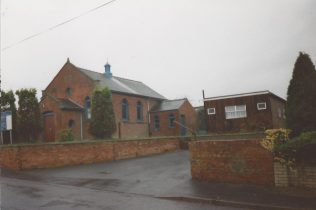 Laughton is south of Scunthorpe. Laughton Primitive Methodist chapel dates from 1826. This chapel was used as Sunday School until 1969 but by the time of Keith Guyler’s photographs it was the car park.

The second chapel adjacent to the first dates from 1927. A new Sunday School was added in 1975.

The Primitive Methodist magazine of 1859 records an account by A Worsnop of the re-opening of the chapel after enlargement. This was necessary because of a revival in the winter of 1857-8 and consent was obtained from WM Ingram Esq.

The re-opening took place from September 17th 1858 with services and a public tea. Speakers included Mr Sanderson, W Lonsdale, E Morton, G West, B Stansfield and A Worsnop. Extension cost around £40 of which they had raised half.