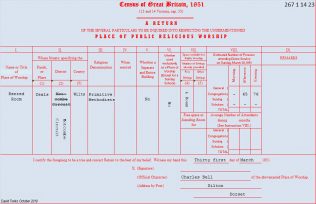 Wiltshire Community website tells us that the chapel was built in 1852 on land that was probably given by Benjamin Perfect.  “There was seating for 100 people, with more space in a gallery. In 1915 the chapel was extended and a schoolroom was built, which accommodated around 20 children at Sunday School in the 1920s. By 1973 there were only 11 members of the chapel and they joined with the Bourton Wesleyan Methodists to form a Methodist Church.“

The return from Zeals Primitive Methodist preaching room to the 1851 Census of Places of Public Religious Worship tells of the society meeting in a rented room. 65 people attended the afternoon service and 76 attended the evening service. The return was completed by Charles Bell, of Silton in Dorset.

The chapel is a private house on Street View in 2009.