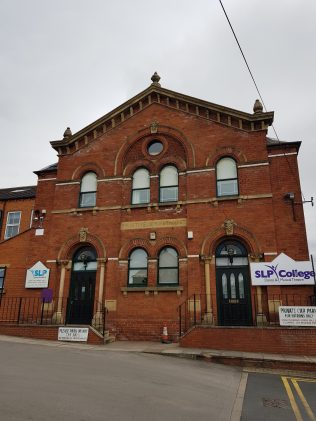 The society had been meeting since 1821 in a rented stone walled, slate roofed chapel, formerly used by the Independents. However it was damp and had a cold flag floor which discouraged attendance, so the society bought the chapel for £100 in August 1857 and set to work. Improvements cost a further £55, included moving the pulpit to the other end of the building, boarding the floor, putting in pews, pointing and painting.

The chapel re-opened on October 18th 1857 with “large and attentive congregations.” Preachers were John Snowdon and H Bilton, local preacher in the Leeds Circuit. The following day was wet but the tea meeting was well attended “and the tables abundantly furnished, gratuitously, by friends.” Speakers included Mr Howard of Leeds, LF Armitage, JC Elliott, H Bilton, J Parrott, A McKechnie and J Snowdon.

They had raised £56 towards the cost and had a £100 mortgage they intended to reduce. Mr Warner of West Garforth was a donor.

A larger chapel was built on the same site in Chapel Lane in 1876, pictured on the Leodis website. There is a note by Geoff Clarkson that “By the late 1940`s the chapel had become a clothing factory and in the 1950`s it was known as J.H. Haley and owned by Eric Wallace. In the mid 60`s I helped convert it into a men’s trouser factory trading as Garforth Sportswear.“

In 2017 it is SLP College, a performing arts educational organisation.