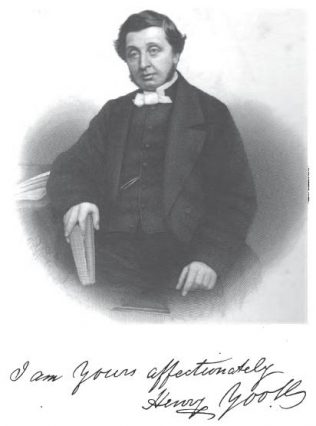 Henry was born on 7 April 1814 in Newcastle upon Tyne, the son of William and Mary. At the age of 13, he became an orphan in the care of Mr Payne, his step-father. Payne married a Roman Catholic and Henry found himself persecuted within his home. He left home aged 14 and found an apprenticeship, learning the art of wool combing, under Joseph Pease of Darlington. For a while, Henry became the leader of a group of sceptics in Darlington, but found his conversion under the preaching of William Towler on 12 August 1834. He soon went on the plan and started his itinerant ministry in 1837 at Berwick where William Towler was superintendent.

Colin McKechnie, one of Henry’s colleagues at Hexham in 1842, describes him in the following words; “a man of devout spirit, who attended well to pastoral duties and was well received as
a preacher”.

His obituary records an increase of over 2000 on his stations during his ministry. His son, Henry, writes; ‘He was a lover of concord, a faithful friend, forgetful of self in the interests of others, a loving parent, a kind husband, a diligent pastor, a faithful expositor of the Word and a general favourite in the homes of our people.’