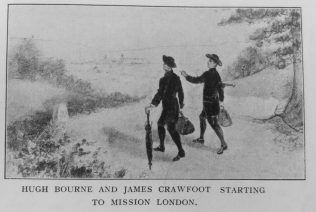 A magical word! There is a strange witchery about this great city. She stretches forth her invisible wand to those who have never seen her, and they dream of streets of gold and pinnacles that cleave the sky. And those who come to see, to know, to live and work within her circle, although they may find neither golden streets nor stairs, feel her wondrous spell and are held willing prisoners.

There is no place like London in all the earth.

Conquer London and you conquer the world. She holds the strategic key of the world’s greatest conflicts.

It is to tell the story of how Primitive Methodism first planted her flag, and through these many years kept it flying, that these papers are written. The Editor suggests the very fitting title, “Our Struggle in London,” for nowhere has the struggle been greater, braver, or more successful.

When had our fathers the daring to make their first attack? There was no little difficulty to gain a footing. That was inevitable. The first attempt was in 1810, but was more of the nature of a reconnoitre with a mild skirmish. The second assault in 1822, although there was no flourish of trumpets, was more successful.

Now having settled dates, before entering into further detail, let us fix in our mind a simple picture of the London of that day and of this.

Hugh Bourne’s London (1810) had little more than one million of a population living within an area of about twelve square miles. To-day there are over seven milions and the Metropolitan area has grown to four hundred square miles.

To-day the chief distinctions of London are City, Slum, and Suburb, West End and East End.

Then, London had its workmen’s quarter in Whitechapel, its lawyers’ quarter in Grays Inn, its aristocratic quarter grouped round Hyde Park and Westminster—with its Houses of Parliament, its Abbey, and the worst slums in the City. The district north of the Strand was occupied by taverns, coffee-houses, theatres and a great market.

South of the Shames, from London Bridge to St. George’s, ran a busy high street with off streets leading on one side to the river and on the other into the marshy open country with its sluggish streams and open ditches.

To this London Hugh Bourne and James Crawfoot came in September, 1810.

The Connexion was at that time hardly born. No chapel had been built, no name taken by the new Church. True Hugh Bourne had ceased almost entirely from manual labour, and James Crawfoot had become salaried preacher on ten shillings a week. Preaching was regularly sustained at about a dozen places in Staffordshire, Cheshire and Lancashire.

It was while at one of these places, Stockton Heath, for an open air service on September 3rd, 1810, that Hugh Bourne was no little surprised to learn that a messenger from London awaited him. John Shegog, a Staffordshire man, but resident in London, had come with an urgent request that Hugh Bourne should visit the city. Whether John Shegog had come all the way from London on this sole business we do not know, but he sought to make doubly sure, for he had gathered round him for the interview a strong group, James Bourne, Crawfoot, Clowes and White.

The cry from London did not fall on deaf ears. The request was long and seriously considered with much prayer and many questions. It cost Hugh Bourne at least one night’s sleep, as London has cost sleep to many a minister since. At length the conclusion was reached that they must go.

So we have to picture to ourselves, September 20th, 1810, Hugh Bourne, then thirty-eight years of age, and James Crawfoot, an old man, setting out with their simple outfit in a hand-bag, on foot for London.

On their way they visited and preached, and on the fourth day arrived at Birmingham. Here they took the coach, and after travelling all night, reached the Metropolis on Tuesday, September 25th, between four and five in the evening, and went to the house of John Shegog. Weary though they were with their long journey, for it had cost Hugh Bourne his second night’s sleep, they set to work that evening visiting and attending service in a chapel.

Thirteen full days were spent in London. The two Sundays are given to open-air work at two points, Portland Place and Kentish Town, where the Missioners preach in turn. The Sabbath evenings find them at the chapel, where we do not know, taking part in the service, prayer meeting or lovefeast. On the second Sunday afternoon they hurry from Kentish Town to City Road to hear Benson, the famous expositor.

The week days are spent in visiting the homes of the people, where many a prayer meeting is held and many a “conversation sermon” preached, and better still, many a soul brought into the light.

And there is just the human touch, too, for which we are glad. Our worthy Founder and his companion go sight-seeing—the King’s Palace, the Abbey, St. Paul’s Cathedral and Lancaster’s British School.

Nor were they void of that simple curiosity which possesses ordinary mortals, for they sought out Joanna Southcott, whose strange visionary ravings were creating no little stir and whose followers were numbered by hundreds. Hugh Bourne gives his verdict with his usual naïveté in one word, “witchcraft.”

Yet their one passion was to save the people. Did they climb the dizzy height of St. Paul’s and look at the multitude below? The sight but quickened their large-hearted prayer, “Lord, have compassion on London.”

On the Monday, October 8th, learning that they had to ride on the outside of the coach, Hugh Bourne purchased two blankets, and wrapped in these they started through the dark cold night for the North.

We have already intimated that this short visit did not permanently plant our Church in the Metropolis. Yet it was not without good results. Several were converted, some regular meetings were commenced and a remarkable case of physical restoration was recorded. A young woman—Ann Chapman—who had been run over by a carriage a year before, and who, after being in the hospital seven months, was turned out an incurable cripple, after the prayers of the Missioners was able to leave her couch, help in household work, and walk to chapel a mile away. Hugh Bourne tells us that this was much talked about and made a deep impression.

Manifestly, a good work had begun in London, if only it could have been followed up. Had James Crawfoot been left to carry forward the work, or, better still, had W. Clowes been despatched to hold the strong position taken, we should not have to report so serious a break in our London history. But the distance in those days was great, and already the nearer work pressed heavily.

It is not until almost a year after this, in the autumn of 1811, that John Benton, rough and romantic, is sent to London. He met with immediate success, for we learn from Hugh Bourne’s Journal: “John Shegog writes, John Benton had great and rapid success. . . . They have joined forty-five since John Benton came.” Still Benton does not feel at home in London, thinks he is not the right man in the right place, and so returns. Benton does not give himself a fair trial. The man who could command immediate success and form four classes, with patience and continuity, could surely have laid strong foundations.

So far, the net results were not negligible; for when the “cause” received the name Primitive Methodist in February, 1812, two of the societies included were High Wycombe and London.

For the next eleven years no missionary was sent to London, and for the next seven we learn nothing of London Primitive Methodism until casually it comes to our notice.

In 1818 the new chapel in Loughborough is opened by a London Primitive Methodist, W. Jefferson.

What was it that happened to our Church in London at this time? It could scarcely have disappeared, and yet how soon the shepherdless flock is scattered in the great city. Had it become disaffected and detached from the parent body? What does Hugh Bourne mean by writing in his Journal: “April 18th, 1818. Here (Loughborough) they have got acquainted with the London Primitive Methodists, one is coming to assist in opening the chapel. Whether this acquaintance be of the Lord or not the event must determine.”

Whatever the explanation, we know that our Church in London is not a direct succession from these first efforts, for when Paul Sugden and William Watson arrived in the City in 1822 as Missioners from the Leeds Circuit, there were no Primitive Methodists to receive them.

But better things were to be, as we shall see in future pages.