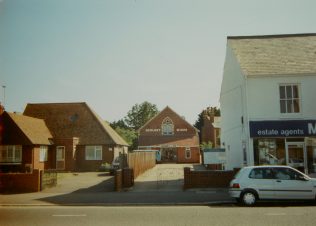 Wokingham Road Primitive Methodist chapel in Earley was opened in 1887 and closed in 1926.  It was known as Mount Zion.  At the time of Keith Guyler’s photograph in 1993 and on Google Street View in 2012 it is a church belonging to the Assembly of God denomination.

The 1887 Primitive Methodist magazine tells of the opening of the chapel.  It replaced a previous one  which had become isolated as many villagers had moved locally towards Reading.  The Prims decided their chapel should do the same. They hoped the new chapel would open free of debt.