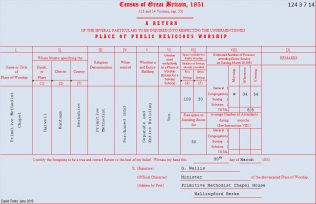 In the 1851 Primitive Methodist Magazine G Wallis records that “the populous village of Harwell” was missioned in 1834-5, but “for want of a suitable place to preach in, the cause dwindled away.”

It was remissioned and in June 1850 a second-hand chapel was purchased from the Wesleyans.  It measured 28′ x 18′, built of brick and slate and was fully equipped with pews and a gallery.  It was opened on 20th October 1850, by Mr Bell of Hungerford New Town.