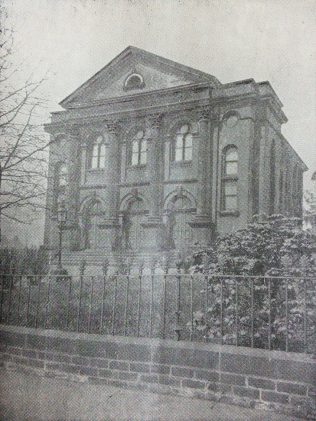 A description of the chapel comes from the November 20th 1870 Architects Journal;

The foundation stone of a Primitive Methodist chapel for the Leeds Third Circuit was laid on 19th inst., by Mr Henry Hodge of Hull.  The account of “what is to be” may be thus given: site- at the corner of Belle-vue and Woodsley roads; frontage 112 feet to the first mentioned street and 175  to the other.  Design, Classical with Corinthian columns to the principal front, surmounted by a pediment of the same order.  Walls of brick with stone dressings.  There will be a basement storey, comprising a large schoolroom and a number of classrooms; the former to be entered from Woodsey Road.  The principal entrance to the chapel will be from Belle-vue Road, by three doors opening into a vestibule, from which the body of the chapel and the stairs leading to the gallery will be reached.  About 750 sittings are to be provided.  The chapel will stand back from the footpaths on the two roads and be enclosed with ornamental palisading.

It was one of the chapels used when the Primitive Methodist Conference was held in Leeds in 1898.