A soldier's account of his journey to the trenches 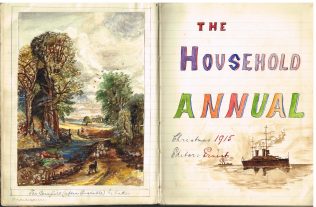 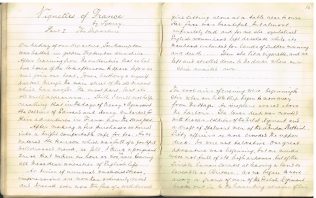 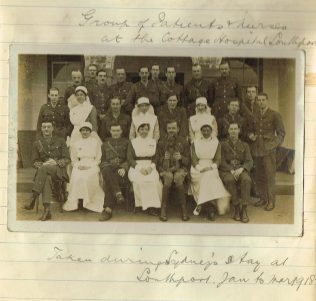 Sydney Phillipson was the son of John Phillipson, a Primitive Methodist minister. Born in Houghton-le-Spring, in 1892, he was the youngest in a close family of eight surviving children.  The family produced a ‘Household Annual’ at Christmas each year, with contributions from each member of the family. It was edited by one of the sons in turn. Four of these fascinating note books survive, having been rescued from a second hand book shop in Hanley by John Anderson, and donated to Englesea Brook Museum.

In 1915, Sydney joined the armed forces. The Annual for 1916 contains his account of setting out for France.

Vignettes of France by Sydney

‘On the day of our departure, Southampton was bathed in golden September sunshine. After learning from the authorities that we had two hours of the late afternoon to spare before we joined our boat, Jones, Anthony and myself walked through the main street of the old seaport, and I could not help recalling that in the days of Cressy and Agincourt the soldiers of Edward and Henry embarked for their adventures in France from the same port.

The cool air of evening was beginning to stir when our little ship began to move away from the stage. The lower deck was crowded with troops – soldiers of the Welsh Regiment, and a draft of stalwart men of the London Scottish. Sixty officers or more crowded the upper deck. We were not talkative; our minds were full of the simple human sorrows of leaving a land so loveable as Britain. As we began to move away a group of men of the Welsh Regiment broke out in the haunting strains of their national hymn. All were moved by this heroic farewell. There was no one to witness our departure; no one to hear the moving chorus of our men; a sense of brotherhood came over us in the solitude and quiet of our going. When the music of the hymn died on the waters, the silence was soon broken by laughter and talk…

I looked down on the lower deck and saw, not without that thrill of pride which has in it a remote sense of tears, that cheerful talkative throng of khaki-clad figures … many were sprawling on the deck drinking tea from mess tins and eating bully-beef … To our right were the wooded hills of the Isle of Wight. We passed here and there a coasting steamer and the men in khaki hailed our sailors, who in defiance of submarine and mine have proved themselves …

Towards dusk we passed a pleasure boat heavily laden with happy holiday crowds and the people aboard gave us a cheer that sounded bravely over the waters. Not long after this strange encounter, we felt the heave of the open sea and we saw in the gathering darkness that we were not alone, for far ahead of us there shone the red lamp of a destroyer …

The romance and majesty of that night on the sea stole into every heart and we were all tuned to a high pitch, and perhaps ever will be, by the spirit of brotherhood that rested over that ship as she voyaged under moon and stars, drifting towards the unknown.

Part 2 The Seine and Rouen

When I awoke in the morning, the ship was moored in the harbour at Le Havre. From the deck could be seen an expanse of docks even quieter and emptier than the docks of Southampton the previous evening. Two hospital ships lay in harbour. On the balconies of a large hospital on the docks I could see the nurses moving to and fro. No more exquisite costume was ever devised to add sweetness and grace to womanly beauty than that worn by our incomparable nurses.

I shall never forget the journey along the Seine, not because there was anything dramatic or sensational in it but because it was all so soft, so pastoral, strange. We passed picturesque towns and villages with their ubiquitous cafes and restaurants, lovely cottages with gardens running down to the bank. Everywhere there was a voice of welcome; little groups of children stood on wooden piers or ran along the banks; old peasants working in their fields paused at their tasks to wave their hats. Stout matrons seemed almost to do physical exercises in their eagerness to show their appreciation of our coming. Towards the late afternoon the river broadened, chimneys and spires came into sight, and we found ourselves on the quay at Rouen; after the usual reportings I was able to sit down in the comfortable mess of the 29 Infantry Base depot and have a welcome tea…

The base camps of Rouen are models of cleanliness and order. We rose at 6.30 each morning and had to be on parade at 8am. ready to march to the Central Training Ground. The officers paraded separately and every morning a list was read out of officers who were that day to proceed to the fighting line. It was an impressive sight to see 10,000 or more men gathering in from the depot camps on to the great parade ground which is a vast expanse of waste land flanked by an old forest…

The mornings were unendurably long. We did a little platoon and company drill; we were put through physical jerks by an Aldershot instructor; we practised the latest jab with the bayonet, and went up narrow trenches stabbing cunningly hidden sand-bags intended to represent men.’

[This is an abbreviated transcript]

In Spring 1919 Sydney married Gladys Paley, a woman from a very different background, who was 12 years his senior.  This is rather a mystery, as there is no mention of any romance in the Household Annual, produced by the Phillipson family in December 1918. At that time they were overjoyed to think that Sydney would be coming home.

He went on to have a distinguished career in the colonial service, and was knighted for his work towards the independence of Nigeria.