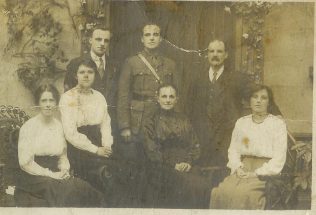 The OWEN family of 144 St. Helen’s Avenue had four children. The parents were David Llewellyn OWEN (coal merchant) and Emily (nee SELDON). The children were WILLIAM LLEWELYN (born 1889), FLORENCE (born 1890), ERNEST (1892) and GLADYS (1894). All were born in Swansea except Emily, who was born in BRAUNTON, DEVON.

The family attended PELL STREET PRIMITIVE METHODIST CHAPEL and were active members of the community until tragedy struck.

He married VIOLET SARAH WEARNE in the Oct/Nov/Dec quarter of 1915, obviously just before he went to war.

I remember, as a child, seeing this “old” lady, sitting in black clothes by the table in the middle room of the house in St. Helen’s Avenue. I used to be afraid to go to the house with my father because of this. No-one explained to me why she sat there, in semi-darkness, wearing black. In recent years those memories made me decide to find out if there was a story behind this lady…………and there was.

In October 2009 I saw a holiday advertised which was based in Rouen. By this time I had discovered that W L OWEN was buried at St Sever, Cemetery, which is just outside the town. I located the site of his grave before I went. The day I visited it was pouring with rain and the cemetery was further away from the town than I had anticipated. Fortunately I arrived at the nearest entrance to his grave as the cemetery is vast.

The COMMONWEALTH WAR GRAVES COMMISSION give the following details about him –

Less than three years after marrying Violet her husband was dead. I don’t know if he had any leave between 1915 and 1918. If not it means they never saw each other again before he died. They didn’t have any children. After his death Violet moved to live with her parents-in-law. Violet’s sister, Mary, also lived with them. She was the “old” lady in black!

Meanwhile William’s sisters, Florence and Gladys were training to be teachers. Ernest attended Aberystwyth University where he gained a history degree. But, because of the family tragedy he had to return to Swansea to help his father in the family business.

During 1918 an influenza pandemic struck Europe. It was an “unusually deadly pandemic”. “The close quarters and massive troop movements of WW1 hastened the pandemic and probably both increased transmission and augmented mutation. The war may also have increased the lethality of the virus.”

The “Spanish” flu pandemic, as it was commonly known, had symptoms which included extreme coughing fits (coughing up blood), sweating, fever, delirium, blood pouring from the nose and possibly ears as well, meningitis of the brain and pneumonia.

The majority of deaths were from bacterial pneumonia, a secondary infection caused by the influenza. But the virus also killed people directly causing massive haemorrhages and oedema in the lungs.

It mostly struck young adults, because the virus triggered a cytokine storm which ravages the stronger immune systems of young adults. The outbreak was widespread in the summer and autumn rather than the winter, which is more usual.

In August there was a second wave, much deadlier than the first. It began in France, Sierra Leone and the USA. The virus had mutated to a deadlier form because of WW1.

The pandemic, although called “Spanish Flu” did not start in Spain. The name probably originated because the Spanish newspapers were publishing news about it.

“La Grippe” was a global disaster, killing more people than were involved in the war.

Why is this relevant to the OWEN family?

“This influenza plague is having serious consequences in some Swansea homes. On Wednesday evening Miss F Owen, daughter of David Owen, coal merchant, of St. Helen’s Avenue and Mrs Owen, passed away and early on Thursday morning her sister, Gladys, also died. Miss Florence was a college trained certificated teacher under Swansea Education Authority at the Terrace Rd School. Her sister was at home with her parents, with whom the deepest sympathy will be felt in the great blow, following as it does upon a war bereavement of some months ago, when their son was killed in action.”

On the 4th November this short report was in the same paper – “Quite a large crowd assembled outside the house and much sympathy was expressed with the bereaved parents whilst practically every house in St. Helen’s Avenue and Kensington Crescent had blinds closely drawn out of respect.”

That was the family tragedy – the loss of three children within four months! 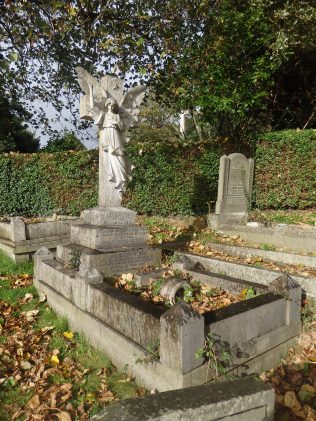 The family has a grave in Danygraig Cemetery. On the front of the grave is written – (Front) In loving memory of 2nd Lieut William Ll Owen (the beloved husband of Violet Owen) who died of wounds in Rouen, June 12 1918, aged 29 years.

“He giveth His beloved sleep”

Left side – and of David Ll Owen who died 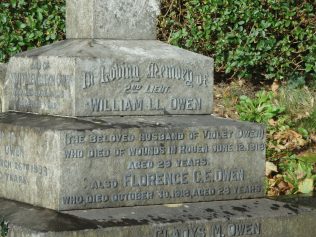 You sometimes read or hear of people who die of grief when they have experienced a tragedy such as this, but, David and Emily 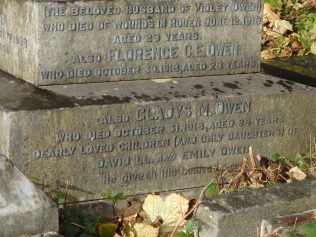 Owen celebrated their Golden Wedding on December 8th 1936. Sadly they had no grandchildren to give them pleasure but the family business continued after it was taken over by Ernest Preece, who was a relative of the family.