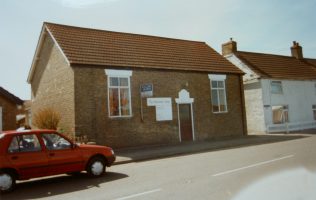 A small society existed between 1840 and 1848 and was revived in late 1857 when Isaac Hickson moved from to Bardney from Stixwold. When numbers grew a chapel measuring 36′ long x 22′ wide and fully boarded throughout was built. It accommodated 180 and cost £160 of which they had raised nearly £40.

It opened from September 26th 1858 with services, a love feast and public tea. Preachers were Mr Whitehouse of London, A Johnson and Brothers Hickson, West, Walter, Prestwood, and Atkin.

After Methodist union in 1932 it was empty and unused until 1944 when it was damaged by a Lancaster crash during the Second World War. It was sold by 1947 and was used as a barn for over 20 years.  In 1971 it became in turn Sharon Pentecostal Church and in 1975 a Salvation Army Citadel.

At the time of Keith Guyler’s photograph in 1996 although it still carried Salvation Army signage it was for sale. The building was converted to a private dwelling in 1998.

Further information about the Trustees and local preachers are on the Bardney Village History website.