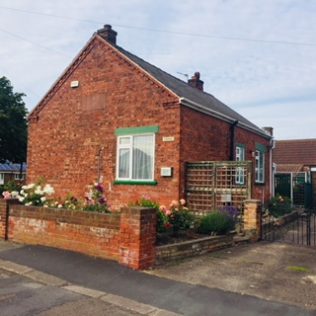 Lincolnshire Archives, Lincoln has the following information about this chapel:

The first Primitive Methodist chapel at Churchtown was built in 1821 and then enlarged in 1835. It was rebuilt in 1888 with a Sunday school opening in 1923. The last service was held in 1948.

The 1941 Statistical return describes the building as brick built, seating 100 with no additional rooms. Interestingly, at that time, the chapel was in a different circuit to the nearby Belton Westgate Chapel.

See also the page on the Ellmer family who were associated with this chapel. This records that the chapel was extended circa 1837.