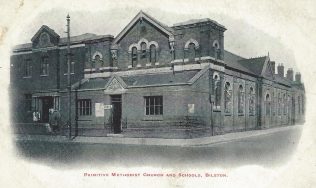 Mr Brueton, the principal mortgagee, gave £53 and a new pulpit. The Duke of Sutherland made the land freehold. Mr G. Jones, himself a Local preacher, gave stones for foundations

R Jukes wrote about the occasion in the Primitive Methodist magazine.