Vociferating hymns in the style of maniacs 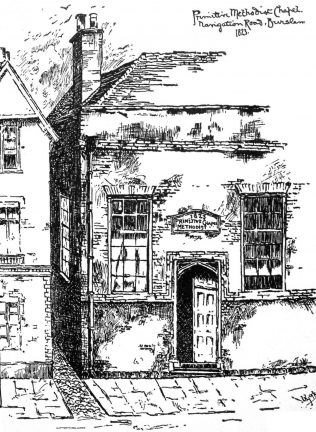 This was the first PM chapel in Burslem and was in use from1823 until 1844. It was probably from here that this group set out: ‘On Sunday 28 June 1835 I saw a throng of Men, Women and Children proceeding arm in arm along the Waterloo Road, from Burslem towards Hanley, vociferating Hymns in the style of maniacs. I was told that they called themselves Primitive Methodists, and that such exhibitions were by no means uncommon in the neighbourhood.’

This quote is taken from a manuscript volume at The William Salt Library in Stafford and was written by James Broughton, a Londoner who married a Burslem girl in 1817. He worked at East India House in London and had started collecting material on Staffordshire history by 1823. He later lived in the county and sold all his Staffordshire material to the banker and antiquary, William Salt, in 1844. He was probably the brother of William Grant Broughton, the only man to have the title Bishop of Australia.