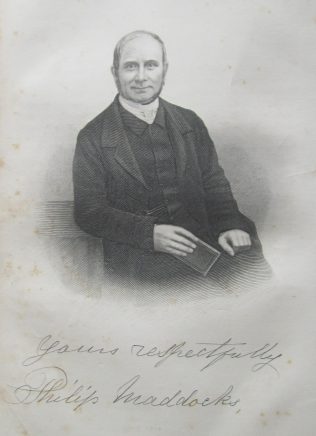 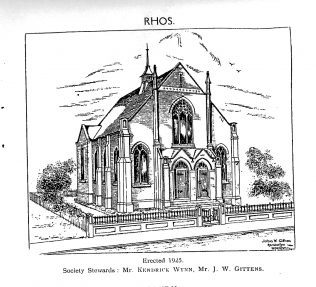 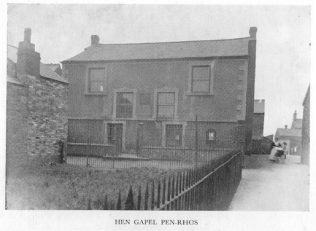 zoom
A photo of the first PM chapel (bought from the Baptists when they moved to Penuel) in Pearson Street, Rhosllanerchrugog.
It is taken from a book called Hanes Eglwys Penuel Rhosllannerchrugog by Samuel Rowley, printed in Llandysul, 1959.

The society at Rhos, as Rhosllanerchrugog is often called locally, was in the Chester Circuit, the Wrexham Circuit, and the Rhosymedre and Chirk Circuit at different times. During the ministry of Philip Maddocks in the Wrexham Circuit (or Mission), 1859-62, a Baptist Chapel was purchased. It was in what is now Pearson Street, as you go eastwards towards what is now Baptist Street, on the right; but all there is there now is a waste patch of grass. Later the society moved to a chapel in Duke Street, now also demolished. I have been unable to find a picture of either building. (See Note 2 below.)

The circuit enjoyed an increase of about 100 members during those years. Maddocks was a local man: born in 1816 at Sarn Bridge in Flintshire. His father opened his house for preaching when the Oswestry Circuit missioned Sarn Bridge, and Philip was converted at his own home. He became a local preacher, then, in 1836, he entered the ministry.

Here is a taste of the kind of religion which Maddocks embraced, as shown in the 1833 Primitive Methodist Magazine (pages 434-8), which gives selections from the Journal of William Fitzgerald for that year:

Wednesday 9th January 1833 Preached at the Sarn. A large congregation. A good time. Held a prayer meeting: many wept. One professed to be made happy.

Sunday 24th February At the Sarn. These people have formed a prayer meeting on the Sabbath morning. Sometimes one of the brethren gives a short exhortation. I went to the meeting and gave a short exhortation. This was a glorious time amongst us. In the evening was assisted by Brother Eaches. We had a powerful meeting and many wept because of their sins. At night led the lovefeast[1]. The people spoke with great liberty. The converting power of God came down, and many were brought to the ground. Some of the friends told me there were six converted to God. Praise the Lord, in this place he is laying hold of our persecutors; in particular one young man who has been a great despiser of our people. It had pleased God to convert one of his sisters… and he said that if ever he should see her down, he would kick her… On Sunday night he went to the meeting; he cried to God for mercy; the praying labourers prayed for him, and in a little time God, for Christ’s sake, set his soul at liberty. In this place we have hundreds coming to hear us. Our preaching house is not near large enough for the people; but our kind friend, Mr Holland, has fitted up his barn, which will hold some hundreds.

Wed 27th February At the Sarn. I arrived at the place before the time, and it was crowded with people. [After the meeting] the people would not go away, so we formed two praying companies; the people prayed, and sinners cried for mercy; and the friends told me that many were converted to God. Truly this was a powerful meeting.

The Primitive Methodist Magazine of 1907 relates that Maddocks was “converted in the midst of a great revival” and that his “ministry was marked by much fervour.” One aspect of his style of work which may have endeared him to the people was that he “was a great power in the homes of the people. He was a most successful family visitor.”

There is a comment in the 1861 account book concerning the recently purchased chapel at Rhosllanerchrugog, which also gives a pointer to the kind of religion and worship in the circuit in Philip Maddocks’ time and a contrast to what would have been experienced in some other denominations: “We fear there will be a falling off in the number of hearers here. Many Welsh attend from the lively nature of our worship. When the novelty is over they will leave.”

It was in Rhosllanerchrugog that the Welsh Revival of 1904-5 broke out in North Wales.

[1] A meeting with a simple meal of perhaps bread or cake and water, for fellowship, testimony, prayer and worship.

[2] A picture of Rhos PM Chapel was located in November 2018 in a circuit centenary leaflet.