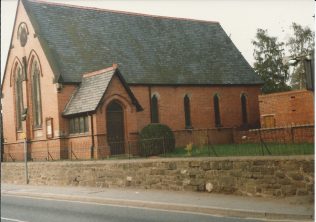 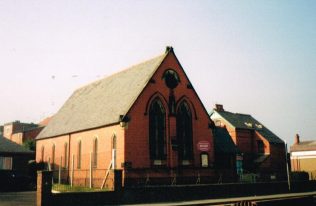 This is now Ruabon Methodist Church. The words on the inscription above the two windows say “Primitive Methodist Sunday School 1892”, so presumably further research would discover that there was once also a now-vanished chapel, perhaps on the grassy area you can see.

One of my hardest pulpit tasks over the years was to conduct in this chapel the funeral of my father, Dinsdale Thomas Young, who had said he would like me to be the minister. That took place on 29th December 1997.

He was born in 1903 in Blaenavon, Monmouthshire, and the family worshipped at Park Street Wesleyan Church. The Wesleyan Guild Anniversary Sunday, 25th March 1923, was celebrated at 11 a.m. and 6 p.m., with the Rev. Norman G. Dunning of Cliff College as preacher. It was under his ministry that my father professed faith in our Lord and Saviour, Jesus Christ. He later became a local preacher, and together with my mother moved to Ruabon in 1978.