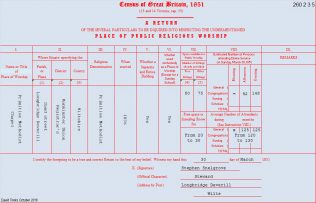 It notes that the chapel was opened in 1836

In the Primitive Methodist magazine of 1865 there’s an account of the opening of a replacement chapel in Longbridge in the Frome circuit.  I believe this is Longbridge Deverill because of the references to Wiltshire location, missioning thirty years previously and the neighbouring village of Crockerton.

Although the society was thriving in the 1850s and 1860s, a review of the Frome circuit in the Christian Messenger in 1919 says “Longbridge is but a feeble society and is worked with some difficulty.”

“Longbridge.—In this agricultural village, in the beautiful county of Wiltshire, our people have preached the Gospel for the last thirty years, and have gathered a number of precious souls into the church of God, many of whom have passed away to the skies, while many remain unto this day witnesses of the power of the Gospel. There is no other dissenting place of worship in the village, so that our congregations and society are large.

We have worshipped during the last twenty years in what  was originally built for a malt-house. It is 66 feet long and 19 feet wide, and only nine feet from the floor to the ceiling. In the early part of 1863 our superintendent, the Rev. E. Powell, waited on the Marquis of Bath, at Longleat House, whose estate includes all the land in, and for miles around, the village, to solicit a piece of land on which to erect a connexional chapel ; but his lordship respectfully declined so far to identify himself with dissent as to grant a new piece for that purpose, but promised not to interfere with the society in their present place.

Being unable to obtain a new spot we arranged with the present lessee of the premises we rent to secure them to the connexion during his holding, together with an additional piece adjoining the old place, which we have converted into a vestry-room, in which we have put a fire-place and copper for the use of the society at tea meetings. We have also pulled down the old place, which was in a very dilapidated state, and erected a new one on the spot.

The present chapel is 20 feet from the floor to the ceiling, has six windows, square-headed, 6 feet by 4 feet, and a good lobby at the door with two entrances into the chapel ; the seats are in the centre of the chapel, with two aisles leading into them, a large platform capable of accommodating the choir and the preacher. The vestry can be thrown open to the chapel on special occasions, and will seat a hundred persons. The whole of the chapel floor is covered with cocoa-nut matting, and the whole of the wood work painted, grained, and varnished.