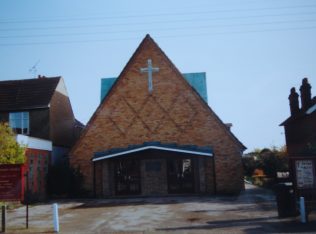 In 1884 a small meeting was formed by the Primitive Methodists in Broomfield but numbers started off really low and often a preacher did not attend. In 1898 the society ended and in 1905 it was still reported that no services had been held since. However, in 1909 attempts were being made to purchase land for a Methodist chapel and by 1910 the first foundation stone had been laid. This first chapel was opened in 1911 and had a strong following, especially in the way of the temperance movement with a group called the “Rechabites”.

By 1930 the debt of the original build had been paid off and in 1937 work commenced on building a hall at the back of the church and by 1938 this work was finished, along with the addition of a porch, central heating and replacing the forms with chairs. By the chapel’s 50th anniversary in 1961 it was seen as essential that a new church be built and by 1963 a new building replaced the old 1911 chapel which was demolished in the process of the new build. Also, this new building was more recently refurbished and renovated in 2004 and the first service took place on Christmas Eve in 2005.  The chapel still stands today and regular service is still occurring with their plans in the summer of 2014 to organise a ‘holiday club’.