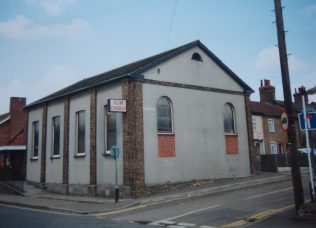 Braintree Manor Street Primitive Methodist Chapel was opened in 1862 but ceased to be used by the Primitive Methodists in 1950. The chapel was built to seat 100 members with pews. It was damaged by bombs during World War 2 but has since been restored. In 1994 it was still being used as a religious house but for the Elim Pentecostal.

The 1881 Ordnance Survey map shows the Primitive Methodist chapel on Manor Street on the corner with Mount Road.  Google Street View in 2009 and 2019 still shows Elim Pentecostal church on the site.

“Braintree, Maldon Mission.—The foundation services for a new chapel at the above place were held on Sunday and Monday, May 11th and 12th.

On the Sunday, the Rev. M. Lupton preached two sermons in the Corn Exchange. On the Monday, a bazaar, of useful and fancy articles, was opened at twelve o’clock at noon, which fully realized our expectations. At half-past three p.m., Mr. Lupton gave an address on the chapel ground, from the words, ” He is my God, and I will prepare Him an habitation ;” and then laid the stone, amid a concourse of at least four hundred people ; after which a collection was made, one lady placing a five pound note on the plate.

The service was closed with prayer, by the Rev. J. Guy ; and the friends adjourned to the Corn Exchange, where about two hundred sat down to an excellent tea. After tea, a public meeting was held, under the presidency of the Rev. J. Guy, and addressed by the Revs. J. Nunn, J. Dinnick, S. Kelley, J. Sheale, and M. Lupton. The proceeds of the services amounted to about £18, which, with £30 previously received, by donations, tea meeting, &c, and promises, bring the total amount to the encouraging sum of about £60.”