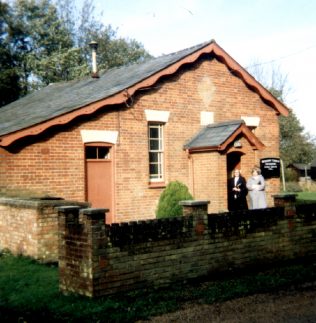 zoom
Crockleford Methodist church, the former Crockleford Heath Primitive Methodist chapel
provided by Alan Went and taken in the 1970s by his father

A tea meeting for 120 was held as part of the celebrations.

The new chapel cost £115 of which £55 had been raised by the time of the opening. Mr Ringe sold the society the land for the chapel on reasonable terms. Amongst the principal donors was Mr Fitch.

The chapel is in a remote location on Chapel Lane, but was still marked on Ordnance Survey maps as Crockleford Methodist church in 1961. On Street View in May 2009, it has been converted into a detached house, but still retains its chapel features.

Many thanks to Alan Went for providing a history of the chapel written by his parents, David and Audrey Went; download further down the page.

* the unclear surname is because the picture of the page in the Primitive Methodist magazine was obscured by my thumb in the image of the page!