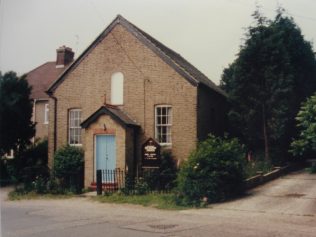 Opened in 1860 but ceased to be used by the Primitive Methodists in 1976. This small chapel could seat up to 75 congregation members using chairs. However, it contained no school hall or other rooms. The chapel was no longer used by the Primitive Methodists after 1976 but was still a Methodist chapel. However, Galleywood announced its closure with a final Act of Worship in a circuit service that was held on Sunday July 1st, 2012. http://www.chelmsfordcircuit.org.uk/page3.html

John Guy writes about the opening of what is called Galleywood Common chapel in 1860.

“This place is called the mother of Chelmsford mission, the missionary (Mr. Monkman) having commenced his labours at that place in the spring of 1854, when there were about twenty members to receive him. Efforts have been made since that period to obtain a site of land on which to build a house of prayer ; the old farm house belonging to Oswald Copland, Esq., was very inconvenient for the preaching services, as well as a sabbath-school, which was conducted therein. After much prayer, the Lord opened our way for a site in the most convenient part of the neighbourhood.

Our appeal to the public met with a cheerful response. On Sunday, October 21st, 1860, the opening services commenced. Mr. J. Guy preached in the morning, Rev. W. Swallow (Wesleyan) in the afternoon, and Mr. E. Tyler in the evening. On the 28th of October,J. Sheale preached in the morning and evening, and the Rev. G. Martin (Independent) in the afternoon. On November 19th, the Rev. G.Wilkinson (Independent) preached, thus closing the services, in which the ministers of the respective denominations united in the most cordial manner. The opening collections amount to about £5, making, with the previous sums raised and donations, £87 Os. 6d.

The chapel is 30 feet long by 24 feet, and 14 feet high to the wall plate. There are two windows on each side, and two in the front. It is fitted up with six pews, which are let at one shilling per sitting. The pulpit was given by our esteemed friend Mr. Thomas Moss, who kindly superintended the erection of the chapel without charge. The total cost is £190 ; the debt on the chapel now is £103. Since the opening, the work of God is reviving, and we hope soon to witness a glorious ingathering of souls. We wish to record our thanks to God for all the help we have received on behalf of our first new chapel in Chelmsford mission.”