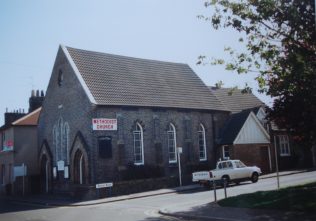 Opened in 1863 and ceased to be used by the Methodists in 1976. This chapel held 175 people using seats. It also contained one school hall and one other room. By 1993, the chapel only had a small congregation of 12 members and was let to the Chelmsford Presbyterian Church and they still ran regular services as well as working with local charities such as CHESS (which helps homeless people) and host book sales for Christian Aid.

Thanks to Tim Banks for making the link between Hall Street chapel and the ceremonies for opening what is called Hale Street chapel, Moulsham  in the Primitive Methodist magazines. I have combined the two pages.

These are the articles:

From the Primitive Methodist magazine of November 1863:

“Chelmsford.—The foundation-stone of a new chapel was laid August 24th, when a large congregation was gathered together. The Rev. M Lupton, of London, conducted the preliminary devotions ; after which J. A. Hardcastle, Esq., M.P., came forward and a silver trowel was presented to him and he then laid the stone. He afterwards gave an address to the people. He also handed over a cheque, and has promised to give us another.

After his address the Rev. G. Lamb, of London, gave an excellent address, which gave great satisfaction. A hymn was then sung and the friends retired to the Wesleyan chapel, where tea was provided. After tea we held a public meeting, which was addressed by the Revs. G. Lamb, M. Lupton, S. Rowe (Wesleyan superintendent), and G. Wilkinson, (Independent). We had in the chair Mr. Samuel Turner, of Chelmsford, a tried friend. The chapel will be 28 feet by 38 inside. J. Dawson.”

“Chelmsford, Essex. —On February 18th, 1864, two very interesting and impressive sermons were preached by the Rev. E. Bishop, of Bedford ; in the morning at eleven, and in the afternoon at half-past two ; at five o’clock a public tea was gratuitously provided by the friends; and at seven a public meeting was held. Mr. T. Moss, sen., who was in the chair, gave some interesting facts respecting the rise and progress of the connexion, after which the Bev. J. Dawson gave a financial account of the chapel; the meeting was then addressed by the Revs. S. J. Southwood, C. Bigg, T. Hook, and J. Cornwell.

The chapel is situated in Hale-street, Moulsham. Mr.T.Moss held the ground on lease, but willingly gave it up to the connexion, after which it was enfranchised. The cost of the ground is £52 10s. ; it is 51 by 42 feet ; the chapel 38 by 28 clear inside. The entire cost will be about £419, towards which we have raised, by subscriptions and donations, .£142. We intend to reduce the debt to .£200, if possible. We return our thanks to the subscribers and donors who are too numerous to mention here. J. Dawson“