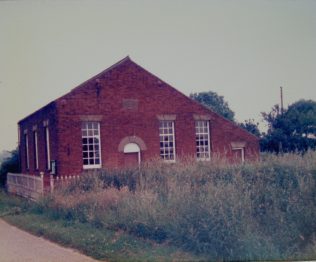 The Primitive Methodist chapel in Beighton was opened in 1862 at a cost of £200.

Thge opening is described in the Primitive Methodist magazine by Richard Howchin.

“Beighton is a small village, situated ten miles from Yarmouth. Our people have for some time had a good cause here, but greatly needed a chapel  and school-room. The neighbourhood for several miles round is entirely under our influence, there being no other place of worship except the Church of England. We have purchased land, and built a commodious connexional chapel, and a good school-room.

The chapel was opened on June the 8th, when three sermons were preached by the Rev. E. Howchin. On June, 15th, the Rev. H. Gunns preached morning and evening, and Mr. G. T. Goodrick in the afternoon. The cost is about £190, towards which we have obtained £60, and the whole required by rule will shortly be raised. May peace and prosperity abide with us. Amen. Richard Howchin.”

On Google Street View in 2009 it is in the process of conversion into a house The Old Chapel.