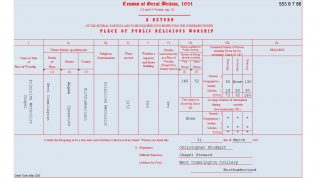 zoom
West Cramlington: Return from the Primitive Methodist chapel in the 1851 Census of Places of Public Religious Worship
transcribed by David Tonks

West Cramlington was a cluster of houses around a colliery to the east of Cramlington itself.  The Ordnance Survey map 1858-80 series shows both Wesleyan and Primitive Methodist chapels there.  The Prims had previously met in a colliery building, then in a small upstairs room – so small the “poor children were parboiled in it”. In 1850 the colliery owner rented a site to the society cheaply and society members built the chapel themselves after work. It cost £131, and at the time of opening, all but £40 had been raised.