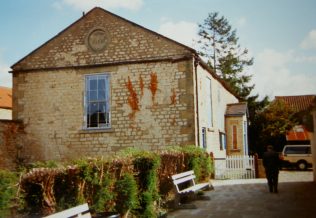 Keith Guyler’s notes say that the Primitive Methodists used a Quaker meeting house.  The date on the front of the building is 1812 and it was extended in 1831.

It was used until the 1970s but Keith Guyler described it as derelict at the time of his photograph.  I am unable to find it on Google Street View in 2009, but that may be because I don’t know exactly where to look.  Does it still exist?