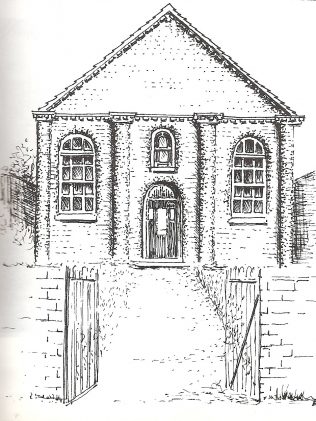 zoom
Aerial photograph taken in 1921
Britain From Above 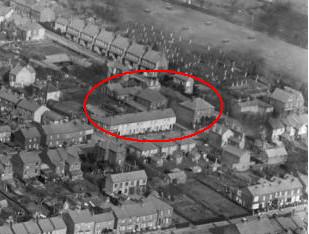 zoom
Another aerial view from 1921
Britain From Above

zoom
St Johns Road in the 1960s. The white wall on the right with the bicycle leaning against it is the boundary of the chapel site. 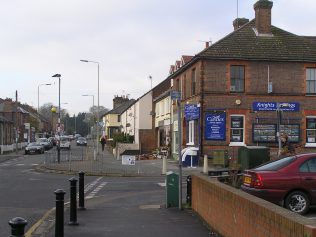 zoom
St Johns Road in 2012. The cottages beyond the chapel are now painted white.
David Noble 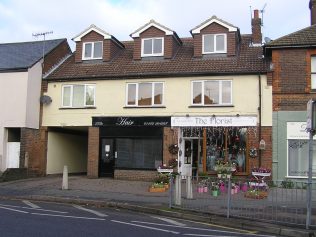 zoom
The site of the chapel in 2012
David Noble 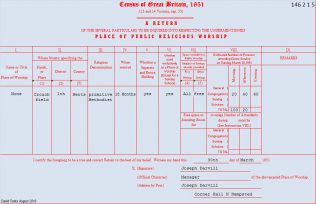 Today, Boxmoor is clearly part of the urban area of Hemel Hempstead, but throughout the 19th century the small settlement then known as Crouchfield, close to the Grand Union Canal on the northern side of Box Moor, was clearly separated from the town of Hemel Hempstead by fields.

There is no mention of a Primitive Methodist society in the Boxmoor area in William Upton’s 1847/1848 survey, but a meeting-place in Crouchfield is mentioned in the 1851 Ecclesiastical Census. No location or description of the meeting-place is given in the Census, but it is said to have been founded about “18 months ago”, which would indicate a probable date towards the end of 1849. In 1858, Crouchfield is mentioned as being part of the St Albans Mission.

It appears that the society at Crouchfield continued to do well such that it was beginning to outgrow the meeting room, but it was not until 1865 that the quarterly meeting gave permission for the construction of a chapel. However, another three years were to pass before a site was bought and it took another twelve months before construction began. In 1869 work commenced on the construction of a chapel on a plot of land on the north side of what is now known as St John’s Road, close to its junction with Cowper Road, which had been acquired from the British Land Company in 1868. A meeting was held in Crouchfield on 5 August 1869 “to set the work in hand”, but a further meeting only a week later decided to make the chapel somewhat larger. As built, the chapel was 27 feet long and 30 feet wide and the total cost amounted to £123 10s 0d (which would be valued at about £180,000 today). The survey of Methodist churches carried out in 1940 shows that the chapel was built of brick, and had seating for 80 in pews. The chapel had one additional room, which was used as a Sunday school.

The chapel’s foundation stone was laid on 17 August 1869 by Mr Thomas Micklem, and the chapel was opened just three months later on 11 November 1869. Thomas Micklem lived in a substantial property, Northridge House, at Counters End, which was situated a distance to the north west of the chapel at Crouchfield (approximately where William Crook House is today). Aged 54 in the 1871 census, his occupation was given as an “attorney at law and landowner”, to which were added the words “farmer; 150 acres, employing 6 men + 2 boys”. Thomas was a widower, and lived with his 19 years old son, also Thomas, an undergraduate at St John’s College, Cambridge, and his cook and housemaid. Another son, Nathaniel, who was two years younger than Thomas, also had a high flying career in the law and national politics, serving as the Liberal MP for Watford from 1906 to 1910. Nathaniel rebuilt Northridge House as Northridge Park in the early 1890s; although the house was demolished during the development of the new town at Hemel Hempstead, the grounds are now preserved as Northridge Park open space. The nearby Micklem School is also named after him. The Micklems came from strong nonconformist roots, and many family members were prominent Congregationalists. Nathaniel was the grandfather of the twentieth century hymn writer, Rev Caryl Micklem.

Crouchfield remained part of the St Albans Mission Circuit until 1870 when it transferred to the Berkhamsted Circuit. This new circuit had been created partly because of the growth of the societies at Berkhamsted and Tring but largely because of the failing state of St Albans. That the society at Crouchfield was not only well established but also thriving can be judged from the fact that major internal alterations were carried out to the chapel between September 1898 and the end of the year. The refurbished chapel was formally re-opened on New Year’s Day 1899.

After the 1932 Union, the chapel at Crouchfield continued in use and remained so until 1959 when a new Methodist church, now known as Bourne Methodist Church, was opened in Chaulden as part of the development of Hemel Hempstead new town. The former chapel is not shown on the 1969 Ordnance Survey map, although there is a building indicated to the rear of the site which might be the added schoolroom. Today, the site of the Crouchfield chapel is occupied by a row of garages behind the hairdressers and the florists shops next to the Castle’s estate agency, formerly occupied by the NatWest bank.