The last Primitive Methodist chapel to be built in Hertfordshire 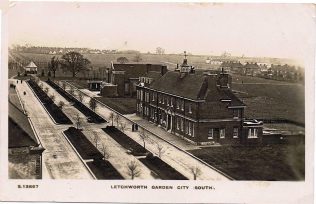 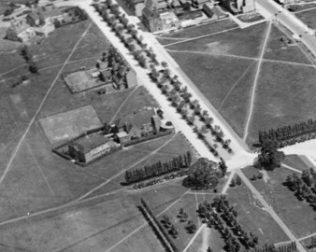 zoom
The chapel in 1925
Britain From Above 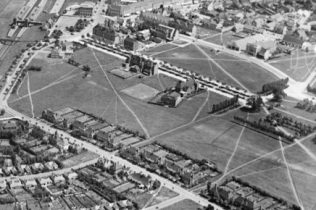 zoom
Another view of the chapel in 1925
Britain From Above 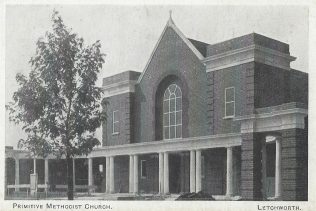 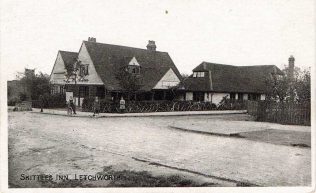 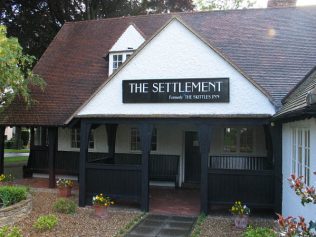 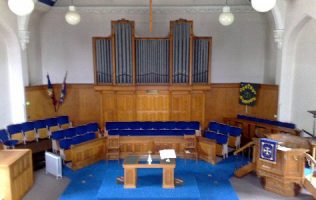 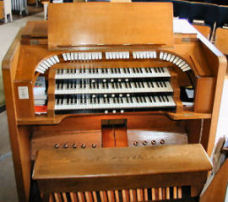 In commenting on the progress made by Primitive Methodism in the years after 1878, Ritson has drawn particular attention to the “large and beautiful structures [which] have been erected in hundreds of instances, in good situations, taking the place of old and unsightly ones in back streets”. In Letchworth, the new Primitive Methodist chapel was located right in the centre of the town, which Ritson would surely have regarded as ‘a good situation’. However, this was only possible because when the chapel was built Letchworth Garden City, which had been established in 1903 as the first of its kind in the world, was still being developed, with civic, cultural, social and religious activities being encouraged to locate in the town centre. However, as the 1921 and 1925 photographs show, when the chapel was built, and for some years afterwards, very little else in the civic area of the town centre had been provided.

The chapel was constructed in 1914 at a cost of about £5,000, and was the last Primitive Methodist chapel to be built in Hertfordshire. The chapel was not only the last to be built but was also the largest in the county, with 500 sittings. Commensurate with its town centre location, it was designed in an early 20th century civic style of architecture. In the 1925 photographs, a substantial hall to the rear of the chapel can also be seen. The chapel was, therefore, undoubtedly “large”; whether it was also a “beautiful structure” is perhaps more open to question.

The building was opened on 26 August 1914. Prior to that, Primitive Methodists had been meeting in the Skittles Inn in Nevells Road (a non-alcoholic public house which, since 1925, has been the home of the Letchworth Adult Educational Settlement) and in other places. The first minister was the Rev David T Mann; the chapel was registered for marriages in 1916.

In Hertfordshire, the period of greatest chapel building so far as the Primitive Methodists were concerned ran from 1858 to 1872. There was a lull from 1873 to 1882 before the final phase of building began in 1883. It is perhaps no coincidence that the three largest Primitive Methodist chapels in Hertfordshire, namely Letchworth, Whippendell Road, Watford (built in 1903 with a capacity of 400) and St Albans Road, Watford (built in 1891 with a capacity of 450) were all constructed in the last in the last forty years of the denomination’s existence in growing centres of population.

The chapel closed in September 1937 when the congregation joined with the Wesleyan Methodists to form the Central Methodist Church. The following year, the organ from the chapel was moved to the Central Methodist Church in Pixmore Way. It was built by Robert Spurden Rutt & Co of Leyton, East London in the late 1920s and had been presented to the trustees of the Primitive Methodist Chapel in Letchworth by Mr and Mrs John Ray. It was opened by Miss Ivy Ray during the ministry of the Rev S Stanley Coulson and dedicated by the Rev Joseph T Barkby on May 22nd 1929.

In the thirty years following the closure of the chapel, the former church hall was used for a variety of purposes ranging from a lecture hall to a temporary parcels office. The building was eventually sold to Hertfordshire County Council and was initially used as part of the local Technical College. The hall and the chapel were demolished in April 1967 to make way for new college buildings; however, in 1998, the college buildings were themselves demolished and the site was again redeveloped. The former location of the chapel now lies under the car park between the Goldsmith Centre and Morrisons supermarket.