A chapel "quite of a new order in this locality" 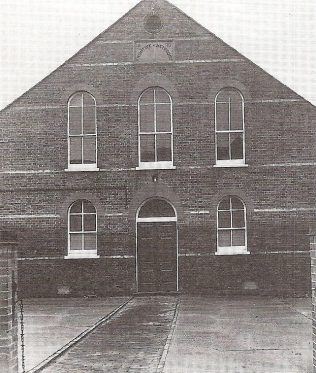 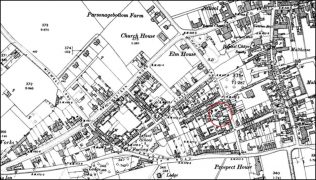 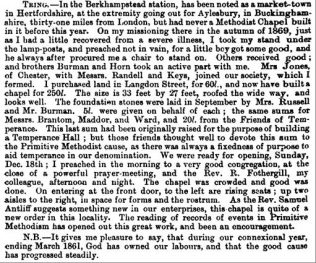 Whilst he was stationed at St Albans, part of the Watford and St Albans Circuit, Thomas Russell was clearly becoming concerned about Tring, a small market town some 15 miles away in the north-west corner of Hertfordshire. There was no Methodist chapel of any description in the town, although by the late 1860s there were five Baptist chapels. In the autumn of 1869 Thomas Russell decided to mission the town; his efforts must have been well received as he formed a “small society” and more or less immediately afterwards he purchased a site in Langdon Street and commenced the building of a chapel. Langdon Street was in the middle of a triangle of land bounded by Akeman Street, Park Road and Western Road, as the 1897 Ordnance Survey map shows, which was being developed during the latter part of the nineteenth century with rows of working class terraced cottages, many of which were 2 rooms up, 2 down, with an outside toilet and coal shed in the garden.

The opening service in the chapel was held on Sunday 18 December 1870. This was also the year when the Berkhamsted Circuit was formed out of part of the Watford and St Albans Circuit. It was made up of societies at Berkhamsted, Tring, Crouchfield (Boxmoor), Hemel Hempstead and Ley Hill, the latter being across the county boundary in Buckinghamshire. Thomas Russell became the circuit’s first appointed minister, although he only stayed for two years before moving to Dover.

Thomas Russell was clearly very proud of the work that had been done at Tring, as can be seen from his report that was published in the Primitive Methodist Magazine in July 1871. In a later report that same year, speaking about the growth of the Berkhamsted Circuit, he noted that “Tring Chapel, just built, fills well every Sabbath day; and … precious souls have been converted to God”, the total for the whole circuit in the previous year having being thirty five. Russell also commented that “Brother Fothergill is an excellent colleague; our local preachers are valuable, and praying labourers are being raised up, so that we have hope of yet going on to prosper”.

In 1890, the Primitive Methodist Magazine reported that “at Tring, in the Berkhampstead station, the church has witnessed a time of refreshing from the presence of the Lord.” In the same year, Kelly’s Directory of Hertfordshire recorded that the town had “a Primitive Methodist chapel with 100 sittings.” An article in the Bucks Herald for Saturday 25 October 1890 mentioned that a new vestry which had been built at the rear of the chapel was officially opened on the previous Wednesday. The Bucks Herald for 21 December 1895 carried a report of “the twenty-fifth anniversary of the existence of Primitive Methodism” in Tring.

It seems that, just before the end of the century, the society at Tring decided that the premises were in need of refurbishment. The Bucks Herald for 11 February 1899 reported on the “reopening” of the chapel and an article in the edition of Saturday 4 March 1899 referred to special services being held the previous Sunday “in aid of the Renovation Fund, on which a deficit of about £10 still exists”. Perhaps these renovation works also resulted in a slight increase in the capacity of the chapel, as the 1940 survey of Methodist churches gave the number of seats in the chapel as 120. The survey also mentioned that the Tring chapel had been “damaged by enemy action”, but local histories of the area make no mention of any such action in the town!

The Registrar General, being satisfied that METHODIST CHAPEL, Langdon Street, Tring in the registration district of Berkhamsted in the County of Hertford is no longer used as a place of worship by the congregation on whose behalf it was on 27th August 1954 registered for marriages in accordance with the Marriage Acts 1949 to 1959 has cancelled the registration.—Dated llth December 1973. S. C. Redding, Superintendent Registrar.

The society continues but the chapel is no more

Following the Union of 1932, the chapel continued in use as the town’s Methodist church, there having been no Wesleyan chapel in Tring. Some forty years later, however, a falling membership and a building requiring expensive repair and maintenance, it was decided, with some reluctance, that the chapel should be closed. The congregation joined with St Martha’s Anglican Church in Park Road, Tring. This was originally a chapel of ease in the parish of Tring, but has since been acquired by the Methodist Church. The Langdon Road chapel closed in 1973 (as the legal notice in the London Gazette confirms) and it was advertised for sale the same year. Subsequently, the building was demolished and the site today is occupied by two semi-detached dwellings.