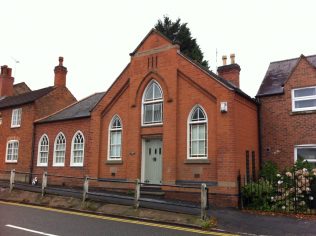 It was last used for services in 1964 after which the congregation joined with the Wesleyan Methodists in their Howe Lane Chapel for worship.  The Mountsorrel Lane Chapel was used as a Sunday School and activities until its closure in 1969.  After that it was in industrial use as the Star works until its conversion to a house in 1995.

The Rothley Parish Council website gives access to the Souvenir Handbook written to celebrate the centenary of Rothley Methodist Church which gives an account of the development of the society.

The Primitive Methodist Magazine of April 1857 contains an account by William Cutts of the improving state of Primitive Methodist chapels in the Leicester First Circuit.  He includes a section on Rothley chapel which at the time “had been in a very low state; the congregation was very small and the chapel debt, amounting to £197, pressed very heavily. It was therefore decided to lower the debt £37.” Part of the money was provided by the General Chapel Fund Committee.  The rest came from “a general canvas of the neighbourhood and by the assistance of our members in the circuit…. Since then our congregation has increased fourfold; sinners have been converted and the society increased.”