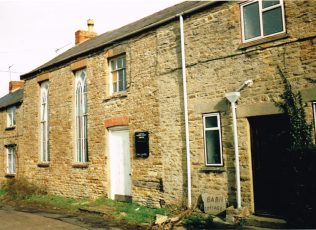 Keith Guyler notes that the chapel was a former barn.  It opened in 1893 and at the time of his photograph in 1990 it was unused.

H Yeates in the Primitive Methodist magazine of 1861 confirms that the chapel was a former barn – but gives the opening date as September 1860 rather than 1893. The account is thus:

“This village was missioned about 25 years ago, by the Rev. J. Preston, who witnessed many conversions, and organised a society. Our progress in the village has been retarded for the want of a suitable place of worship. It having become necessary for the sake of the health of our aged members and congregation to secure a suitable place in which to conduct our services, and as every effort to secure land had failed, Mr. George Farmer, leader of the society, for the sake of the future prosperity of the cause, let us have his barn, and we have secured it on lease, as he is not yet empowered to finally dispose of the property.

This place is a new building, constructed with stone, covered with slate, will seat about 240 per sons, and is furnished with a commodious gallery. The cost is a little more than £100. On September 30th, 1860, Mr. H. Platt, preached the opening sermon, and on the following day he preached again. A public tea meeting followed, the provisions of which were nearly all gratuitously furnished by the society and friends. More than 200 persons took tea. In the evening Mr. R. Edmonds, senior, of Banbury, took the chair, and the meeting was addressed by Messrs. R. Brazier, Medcalf, Platt, Yeates, Palmer and Portnell. On the two following Sabbaths, sermons were preached by Messrs. H. Yeates and R. Edmonds, ex-mayor of Banbury. The proceeds from all the means employed will amount to about £70, and the friends think of making an effort to secure the whole cost.”