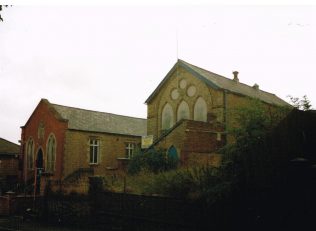 The Primitive and Wesleyan Societies in Raunds united in 1966.  A rich description of the development of the Primitive Methodist chapel in Marshall Road, Raunds can be found on the history page of the Raunds Methodist church website.

The chapel in Marshall Road was first built in 1855; it accommodated 150. In 1899 it was substantially enlarged and a schoolroom was added in 1907.

Keith Guyler notes that the chapel was sold to the Roman Catholics and became St Thomas More Church.  It is on the left in the photograph.  In 1997 the original 1855 chapel on the right was for sale.  On Google Street view in 2009 it appears to be in use as a house.

The Rushden Research Group has provided some wonderful illustrations and information about this chapel.