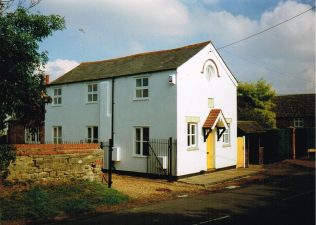 “Northampton station.  We have just opened a new chapel at Paulerspury, the birthplace of the distinguished Dr. W. Carey, and about one hundred yards from the house where he was born. Sermons were preached Nov. 9th, by Mr. H. Collier, and Nov. 16th, by the writer, and Mrs. Sharman. Nov. 17th, a soiree was held, and a good meeting after.

The chapel is 23 feet by 16 feet in the interior, and 13 feet from the floor to the ceiling. It is built of good brick, with dressed Bath stone sills, and arches over the windows and door, and a neat ornamental inscription stone. The interior is fitted up with pulpit, rail back-seats, and forms. The entire cost will be about £75 towards which we have received by collections, &c., £19, and expect to realize the one-third shortly. “

On the 1884 Ordnance Survey map a Primitive Methodist chapel is shown in Pury End  -presumably the same chapel – and it is still in use in 1976.  In the light of the above account of the opening, it is interesting to see the chapel is on Carey’s Road.

Several buildings in Pury End were damaged during World War II when the hamlet was hit by a stray bomb. These included the Bricklayers’ Arms pub and the Primitive Methodist Chapel.

The former chapel is shown on Google Street View in June 2011 as a house.  It is known as “Old Chapel Cottage”.