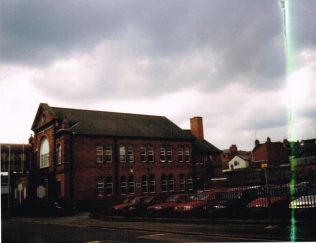 There were at least four Methodist chapels in Kettering.

The Primitive Methodist Chapel erected on Bath Road in 1906 was a very large, impressive red brick structure with architectural detailing to the front. At the time of Keith Guyler’s photograph and on Google Street View in 2012 it is shown as used by ‘Timsons’ book and printing factory.

.The 1902 Primitive Methodist magazine tells us a good site has been secured for a new chapel to replace the rented chapel then in use. Mr Bicheno the minister  the person in charge of the work in the society, had great enthusiasm and optimism.