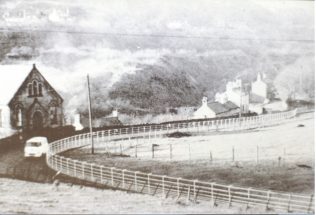 I have done almost no research concerning this chapel; it was demolished  some years ago. The photograph was kindly supplied by James Nuttall of Broughton District History Group. It appears, labelled by denomination, on a 1901 OS map of the area, yet the December 1869 Wrexham Branch Minute Book says: “That the chapel at Moss be given up and the friends there dispose of the furniture as best they can.” It doesn’t sound as if a new chapel was expected to be built to replace an old one, and yet it appears on a later map! Curiouser and curiouser, as someone once said.