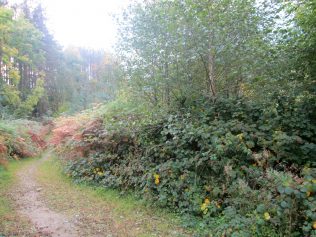 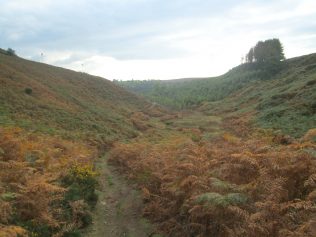 In the 1870s there was a Primitive Methodist chapel in the hamlet where squatters dwelt on Newtown Mountain above Penycae. It is impossible now to locate the ruins of the building, as the area has been densely covered with a plantation. George Borrow happened across the hamlet in 1854, as related in Wild Wales Chapter LXI. According to Ifor Edwards in Country Quest, August 1989 (pages 16-7), the 1851 population census records fifteen cottages inhabited by colliers and labourers. Remains of the hamlet were still visible in 1962. By 1871, according to the Evening Leader (6th June 2009, pages 14-5), the community was significantly depleted, with many of the remaining residents being single women and elderly men. An article by “Aradrwr” on page 28 of The Leader of 8th December 2009, says that the squatters came from North Wales, Shropshire and Chester to work in the coal mines, whilst the Route 9 leaflet of Walks around Wrexham says they worked in the coal pits and sandstone quarries. Aradrwr adds that the remains of the Methodist Cyntefig chapel were visible in 1962: cyntefig is Welsh for Primitive. Further confirmation that the chapel was Primitive Methodist comes from an article by Ifor Edwards in the August 1989 issue of Country Quest (pages 16-7). A Chester Plan for 1865 gives “Newtown” with Minera, Rhosllanerchrugog and Rhostyllen, and it is presumably a reference to this hamlet.

The ruins of the hamlet are in the trees in the photographs, but all that can now be seen along the remaining paths in the dense plantation are a few fragments of broken down walls.