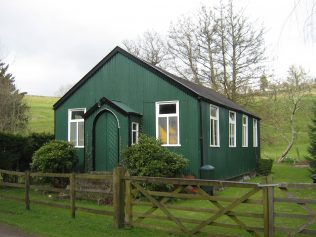 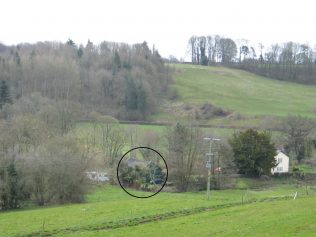 I can find no reason why a place should be called Pontyblew (“Bridge of Hair”); nor does it seem to make any more sense if you call it Pontyblow, as the old Prims sometimes did. Whatever the name means, the chapel does stand close to a bridge over the River Ceiriog.

In March 1838 the Oswestry Circuit decided that the people at Pontyblew and those at Halton should have joint preaching. In June 1838 they decided to ask William Woollams to raise and lead a class at “Pontablew”.

Pontyblew seems to have been a somewhat precarious cause, for in 1841 it was taken off the Plan, and again in 1843. Nonetheless it continued, and became part of the later Rhosymedre and Chirk Circuit.

The bottom photograph shows the chapel ringed and the Ceiriog River beyond it.