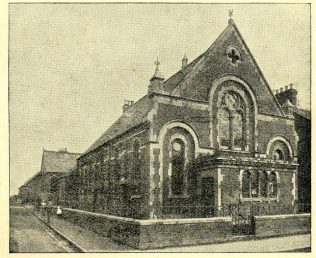 The first chapel was erected in nearby Chapel Street in 1871.  It was later used by the Salvation Army (now in a new building).  Owing to the growth of this part of the town, in 1890 a new site was found on the corner of Cricklade Road and Edinburgh Street for a new church seating 300 with a little later, new schools.  It was called Russell Memorial Church after Thomas Russell the early missioner. The cost was to be around £1,000 of which they had raised half at the time of the stone laying.  By the time of opening they owed around £400.

In 1910 its vital statistics were recorded in the Brinkworth and Swindon Synod Handbook as:

The Souvenir and Official Handbook of the Brinkworth and Swindon District Synod (April/May 1925) says of Cricklade Road:

“The church has contributed in no small measure to the pulpit efficiency of the Swindon and many other Circuits.  The services are marked by heartiness, aided by a choir.”

In 1964 the chapel was closed and the congregation joined that of the Trinity Methodist Church, formerly Wesleyan, on the opposite side of Cricklade Road. In 1965 the chapel was sold for use as a warehouse. It has since been demolished.