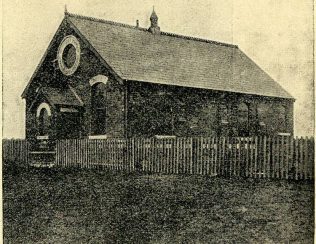 “An iron structure was erected in 1890 which soon became too small and was sold. A new site was secured and in 1907 the present building erected with sufficient land for a new Church when the opportunity arrives.

The opportunity never arose and in July 2012 the land in front of the building is shown as a used car lot (Google street view).   Thechapel is still active as the Church of God of Prophesy.