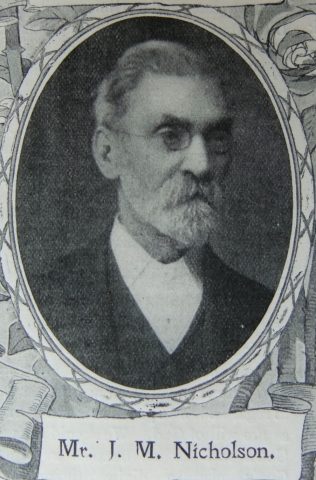 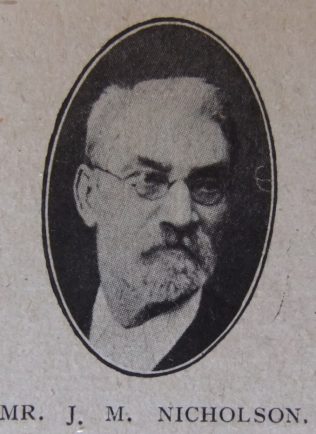 The Chancellor of the Sunderland IV. Circuit, Mr. J.M. Nicholson, is in his seventieth year, and has been associated with Primitive Methodism from his earliest days. He is a local preacher, class leader, and Superintendent of the infant department of the Sunday School. Twelve months ago he was awarded the roll of honour for length of service as a Sunday School teacher. Vice-President of the senior, he gives the address weekly to the Junior Christian Endeavour; is a most ardent Temperance Reformer, and specially devoted to the Band of Hope. For years he was choir master and was presented with an illuminated address on retiring. He is Circuit Secretary for the orphan home, and diligently promotes its interests. In public life he fills many important positions. He is held in the highest esteem throughout the town. The Circuit is proud of its chancellor, and prays for him long life and continued usefulness.

John was Guardian, to parents John Nicholson and Jane Appleby. He was baptised on 2 April 1837 at Sunderland.

John’s obituary records that in his early days he worshipped in the Flagg Lane Chapel. In 1856 he helped in the purchase of Maling’s Rigg Chapel. When in 1857 he removed to Hendon, in 1857, he assisted in founding a new cause in Emma Street; and it was largely due to his efforts that the church in Mainsforth Terrace was built.  When that church became head of a new circuit he was appointed circuit steward. He became a Deed Poll Member of Conference in 1911.

John was a local preacher for sixty-five years. He was also President of the Sunderland and Newcastle Primitive Methodist Psalmody Association.

For many years he was a member of the Board of Guardians and did much to assist the poor in the town.

Shortly after returning from the London Conference of 1917, John had a seizure – the result of an air raid when Conference was sitting, and this seriously incapacitated him for the last two years of his life.

Transcription of sketch in the Christian Messenger (2 MB Adobe Acrobat document, opens in a new window)