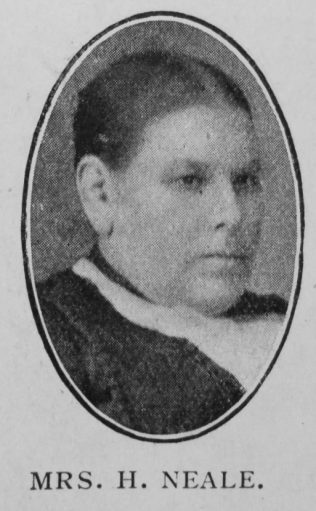 Mrs. Hannah Neale died on October 30th, 1911. Born at Edgefield, Norfolk, in 1852, she was brought up in the P.M. Sunday School. She came to the North in 1876, and resided in the Leamington Circuit until her death. She married Mr. Wm. Neale, of Walbottle, who is an active worker in our Church.

Mrs. Neale was a quiet woman, yet an ardent worker for the Church. She glorified in giving what she could to make her Church a blessing. She was a faithful mother, loved by her husband and children. All are connected with the P.M. Church at Throckley, the oldest son being a local preacher.

Mrs. Neale passed away peacefully in the presence of all her family. She claimed the victory over death through Jesus Christ our Lord. She bore her cross patiently; her illness was of short duration, and with that hope which bloometh with immortality she has gone on to be crowned by her Lord and to be followed by her husband and children. A large number of friends gathered to her funeral, November 2nd, 1911, the service being conducted by the Rev. Edw. Campbell.

Hannah was born in 1852 at Edgefield, Norfolk.

Before her marriage, Hannah worked as a dairymaid (1871).

Note: The surname, Neale, is spelt in several variations in online records.