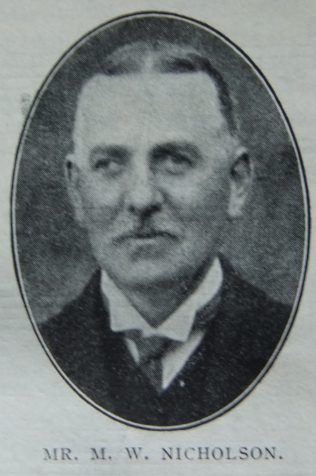 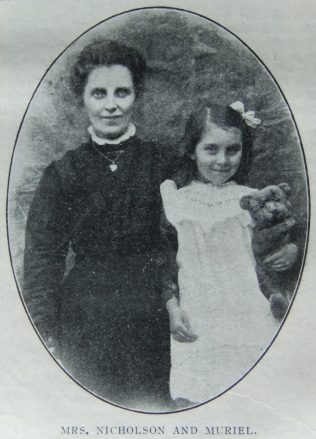 Worthy Workers of our Church

Mr. Matthew W. Nicholson, the esteemed steward of the Bedale Circuit, together with Mrs. Nicholson, celebrated his silver wedding on June 8th, 1910. In their happy home, with one son and three daughters all following in their footsteps, this was a season of much gladness, for here, faithfulness to Christ’s Church, as represented by Primitive Methodism, has resulted in success in business and in children who love and reverence their parents. Both Mr. and Mrs. Nicholson are natives of Bedale, and Mrs. Nicholson’s mother many years ago used to attend the cottage meetings held in Aiskew by the late Mr. Thomas Dawson, when the early preachers first came into this neighbourhood. When the chapel was built, Mrs. Nicholson’s parents (Mr. and Mrs. Hall) left the Baptists and joined our Church and remained with us to this day. As a girl Mrs, Nicholson was a Sunday school teacher, even when the school was not so prosperous as it is to-day, and right loyally stuck to her post. When Mr. Nicholson began to take an interest in her, instead of going to the Wesleyan Chapel, where he had been attending: for some time, she persuaded him to come to the Primitive Methodists and lend a helping hand. From that time to the present he has loyally stood by the cause.

For over four years he has been Circuit steward, and in a most satisfactory way has performed its duties. Knowing how unsatisfactory the old manse was, he freely gave a site of freehold land on which to build a new house. This site was eventually sold, and the entire proceeds devoted towards the purchase of a newly-built house which he himself had paved the way in securing. He has thus made the Circuit more attractive to the ministry. For over twenty years he was Society steward, and all the time that he has been connected with us he has been a member of the choir.

Their home has always been open to ministers and laymen alike, and with true Yorkshire generosity do they entertain all alike. One visit does not ever suffice for such visitors. What our Aiskew Society would have been through all the many years of its life without our friends it is impossible to conceive.

Their eldest child and son, Harry, is our organist, and was a scholar at Elmfield College in the days when Dr. Quine and Mr. H. G. Chancellor, M.P., were pupils. After his visit to the Centenary Camp Meetings on Mow Cop, he undertook a lecturing tour on the Circuit for the Centenary Fund, and surprised and charmed his hearers by his beautiful descriptions of what he had seen, heard, and felt. We trust they may live to celebrate both golden and diamond wedding.

Matthew was baptised on 22 July 1863 at Bedale, Yorkshire. His parents were Thomas, a bricklayer’s labourer, and Sarah.

Matthew worked as a grocer.