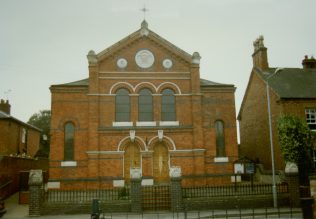 The first Primitive Methodist chapel was built on Elm Avenue in 1828, although there had been a society in the village for several years.  Opening services took place on Sunday 28th September and was reported in the 1830 Primitive Methodist magazine by a “well wisher to Zion.”  Preachers were Rev Richard Alliott Jun. (Independent minister) and Brother King.

To celebrate the opening, Rev Smith, the minister at Keyworth Independent chapel and his friends shut their chapel and suspended all public services for the day

The chapel was replaced by a larger Methodist Church on Selby Lane in 1881.  During the latter half of the 19th century the rapidly increasing support for Primitive Methodism led in 1872 to a bitter dispute at Selby Lane when the establishment of a non-denominational Board school was met with strong opposition by the Anglicans who had built the first purpose-built National school in the village in 1862 very nearby.

The second Keyworth chapel was opened in 1880.  The church is still active as an Methodist/Anglican/URC partnership.