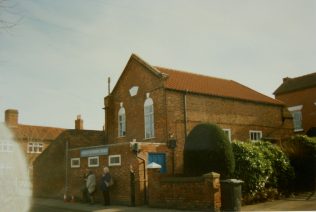 The Southwell and Nottingham Church History Project describes the state of Lambley in the early 19th century.

“The poverty of the parishioners, the frequent absence of the rector and the damp and ruinous state of the church together with the influence and appeal of nonconformity combined to help the rise of Methodism in Lambley.

The first chapel was built at the top of Chapel Lane by the Methodist New Connexion in 1807. In 1847 the Primitive Methodists bought a plot of land on Main Street on which the present Methodist Chapel stands. For a while the ‘Prims’ used the Chapel Lane building but in 1848 it was bought by the Wesleyans and the ‘Primitive’ Methodists had to find other accommodation. Until their own chapel was ready they held their services in a barn in the grounds of Primrose Cottage Main Street. The chapel opened in August 1849.

The Religious Census of 1851 confirms some of the Rev Cobden’s fears about the state of his Anglican church. Out of a population of 951 the congregation at evensong was 55 compared with 120 at the Wesleyan Methodist chapel 98 at the Primitive Methodist chapel and 25 at a service for Latter Day Saints.”

The chapel has been converted into a house.