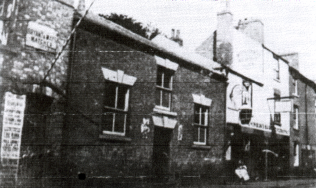 zoom
Original Methodicals Church on Priory Street, Lenton, where Henry Roe's older brothers took him when he was a child. Taken in 1902.
Mr. A. Spick 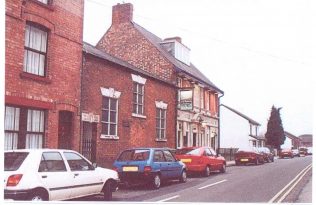 zoom
Primitive Methodist Chapel, Priory Street, Lenton. The door has been moved from under the central window to the left of the building. The Boat Inn is seen right next door.Taken in August 2001.
Paul Bexon

When Henry Roe was five, in 1847, his brothers Thomas and Charles took him to the Eastlyan Sunday School that was next door to the Boat Inn on Priory Street in Old Lenton. He remembers “the clean-washed, clean-dressed and clean-hearted” children singing holy hymns and on the other side of the thin partition there were, “dirty, drunken, howling sinners already in hell.”

The Hall was originally built by the Wesleyan Connexion in 1826 and sold in 1853 to the Original Methodicals (Primitive Methodists) when the Wesleyans built their new church. The Sunday School was included in the sale. The Primitive Methodists, in their turn, built a new church in Abbey Street in 1882/3 and sold the old chapel to Lenton Parish Church for the sum of £225.