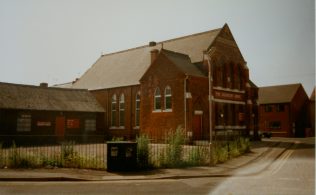 The Primitive Methodist Centenary Hall was opened in 1910 and closed at the start of the 1950s.

On the 21st July 1951, the Salvation Army opened the building as its new citadel, the ceremony being led by Mr. H. Bernard Taylor, member of parliament for Mansfield and supported by the mayor Councillor G Abbott and his wife.  It is still in use in 2015.