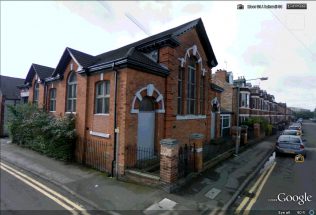 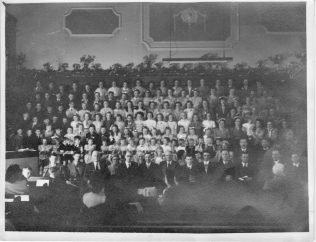 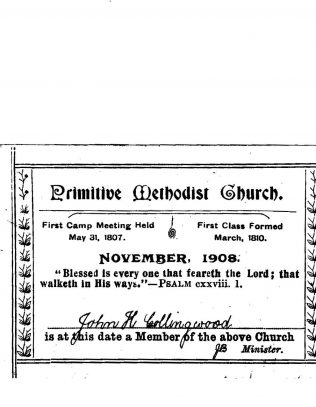 The Ashwell Street Primitive Methodist Church had its beginnings on Easter Day 1888 when a Local Preacher C. Ashmore began open air services. Soon afterwards the Primitive Methodists rented a room over a grocers shop on Curzon St. and used that until October of the same year when they erected and opened a corrugated iron chapel in Dunstan St.

A larger chapel was soon needed it was built at the corner of Ashwell St. and Moore St. and opened on July 21st. 1905. It soon developed a large Sunday School and so new premises were erected adjoining the chapel and opened on July 28th. 1928. The Church eventually closed down in 1965.

I lived on the corner of Ashwell St. and Knight St. and remember at age three being taken by a little girl named Mavis (she was four) where we met for the first time many people who were to become influential in my life through the Sunday School, the Church, and the Guild.

As you can see from the photo the basic design follows that of many Primitive Methodist Chapels.

For many years Ashwell St. had many local preachers in its congregation, men like Ernest Whittle, J.J. Kirk, Jesse Bowes, Fran Flecknoe, Ron Morris, Harry Allen and may others over the years, and also produced a number of ministers including myself.  It was an active Church with a good Sunday school and each year the front of the sanctuary was covered with tiers of benches and all the Sunday School marched in to “Stand up, Stand up for Jesus”  and took their places for the Sunday School Anniversary. There was also a small orchestra just for that special occassion.

The first two ladies that I met there were Rhoda and Joyce Collingwood.(The Class Ticket is their Father’s who was also a Primitive Methodist Local Preacher)They ran the Primary Department along with Beatty Tizard, and then later there were other teachers such as Nellie Whittle, Roy Seagrave and others. The head of the Junior Sunday School was Alfred Watson, who was rather deaf and could hear sound as noise but that seemed to be all. The result was that sometimes(quite often)the boys were reprimanded for making a lot of noise, when it was really coming from the girls on the other side of the room!!!

One of the highlights of the year was the Annual Sunday School outing to Mablethorp for which Buses were hired to take us there.

The Christian Endeavour was also a part of the life of Primitive Methodism, although this was not a Methodist organisation, being founded in Portland Maine, USA in the Late 1800s in a Congregational Church. CE provided an opportunity for fledgling preachers to spread their wings and try out a few sermons, usually based on material in the CE Yearbook.