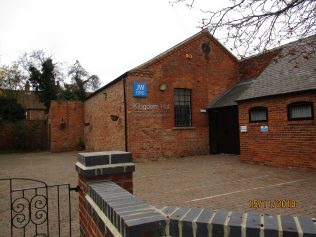 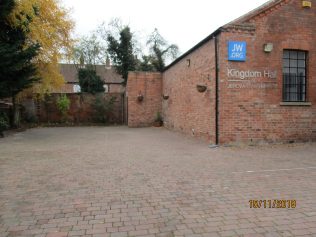 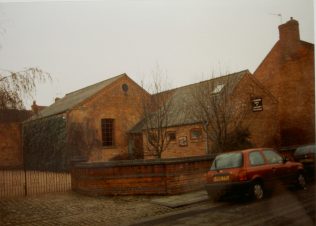 zoom
Remaining buildings of the 1873 Newark Primitive Methodist Church, Parliament Street, as they were in 1996. The chapel was closed in the 1960s; Keith Guyler's notes say "demolished"
Keith Guyler 1996 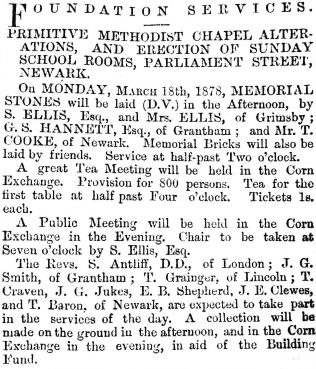 Englesea Brook Museum has just acquired papers from a time capsule deposited at this church on 18 March 1878 when the foundation stones were laid for an enlargement and the addition of a school room. The papers consist of two circuit plans (Newark PM Circuit, Dec 1877 – March 1878 and March – June 1878), a manuscript note (transcribed below) giving details of the chapel with a list of trustees and other officials and chapel and connexional statistics, a printed leaflet ‘Rules for the Members of the Primitive Methodist Connexion’, and three newspapers, the Primitive Methodist for 14 March 1878, The Newark Advertiser 13 March 1878 and The Newark Herald 16 March 1878. Both the local papers have notices for the forthcoming stone-laying services.

Memorial of the Foundation Services in connection with the Enlargement and Material Alteration of the Primitive Methodist Chapel, and the erection of Sunday School, and Class Rooms, Parliament Street, Newark.

These Buildings are dedicated to the Holy Trinity, God the Father, Son, and Holy Ghost, and are intended to be used as places in which the gospel of our Lord Jesus Christ will be preached, the young instructed in the truths of the sacred Scriptures, and in which Christians will meet to observe the various ordinances appointed by the authority of the word of God.

The church of Primitive Methodists connected with this place of worship was established in Newark about the year of our Lord 1817. Its history has been marked by the vicissitudes common to the imperfect churches of Christ on earth. It has been blessed with periods of spiritual prosperity, and it has had to mourn seasons of religious declension. Doubtless there have been instances of members walking unworthily, and times of carnal contentions in its history. Yet we rejoice with thanksgiving, that, notwithstanding acknowledged imperfections, many, very many since the formation of the Church here have, through the instrumentality of the truth as it is in Jesus, and by the quickening power of the Holy Spirit, been born again to a higher, holier, happier and more useful life in Christ Jesus. Sinners have been saved, families have been blessed, the young have been brought to know the Lord, believers have been helped in their Christian journey, and not a few have triumphantly finished their course and departed to be with Christ who were led to a knowledge of the truth by the agency of labourers connected with this Church. The praise of all good we ascribe to God. Our trust for the future is in Him alone, and our prayer is that He may make the agencies employed here more fruitful to his glory in all that is truly good in the future than has been in the past.

The Primitive Methodist Church in Newark has at present 75 members, and the Sunday School 35 teachers, and 210 scholars. In the Newark Station there are 190 members, and 290 scholars.

In the Primitive Methodist Connexion there were reported to the Conference of 1877:

The Trustees of the present buildings are:

The Memorial Stones are laid today by Samuel Ellis Esq., and Mrs Ellis of Grimsby, G. S. Hannett Esq of Grantham, and Mr T. Cooke of Newark. Thomas Baron is the resident minister. James Kerridge of Wisbeach is the architect and Thomas Henderson of Newark is the builder.